We know that you may think we are nuts for thinking that there is anything interesting about shaving cream. While we may indeed be nuts, it is not because we find the history of shaving cream pretty cool. Read along for a bit before you call the men in the white jackets on us, ok?

In the early days of shaving, there weren’t any razors invented yet, so eggs or nuts were used by men to pull their beards out.

This sounds pretty painful and not very effective if you ask us. It kind of makes sense that the art of shaving would evolve from brutal plucking to the next phase that was invented by the Ancient Egyptians.

These clever folks decided to use animal fats as a shaving lubricant. Ancient Egyptian priests eventually became the first people to place importance on shaving as part of a personal hygiene routine.

They also did not have razors, so the tools of the craft made out of sharpened copper to shave with the help of the animal fats. 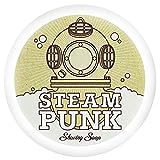 Rumor has it, Alexander the Great was a pretty strong and Russian czar, Peter the Great were both big supporters of the importance and shaving. It took until about the 26th century, B.C. for the next documented form of shaving cream to come about.

The Sumerian civilization in Iraq was responsible for the creation of shaving cream that consisted of alkali from wood and animal fat that was to be mixed together.

We’re not sure how that worked, but we applaud them for their resourcefulness and breathe a sigh of relief that those days are behind us.

During the cold war, tubes of shaving cream were used to send secret codes and messages. No one was ever the wiser either and didn’t suspect a thing from the unassuming little tubes. That’s actually pretty clever and an interesting little fact.

Foam based shaving cream made its debut in America in 1925 and has grown a lot in the years since. Around 1940, the first shaving cream that didn’t require a shave brush to spread was produced and thus the ever popular shaving cream in an aerosol can was born. .

Shaving gel was developed in the 1980’s and was an immediate success. Finally in 1993, a shaving cream and shaving gel hybrid was created by P&G. The foal gel mixture is still pretty popular to this day.

Today, we are seeing a resurgence of people heading back to old school ways of shaving. With this throwback to simpler days before disposable razors an aerosol cans, shavers are not only using old-style razors.

They are also using more traditional styles of shaving soaps or creams. You can now find a shaving mug with a soap puck or a tube of cream in many bathrooms. Shaving brushes are used along with old school razors now too.

Now, there are many different kinds of Tabula Rasa creams, with at least six different scents – Tea, cream, Dark Lavender, Olibanum (which is basically frankincense), Vetive & Tangerine, and an unscented one. All of these smell pretty great, but I’ll be focusing on the unscented and Vetiver & Tangerine varieties for this review. One of the pros of this shaving cream is that it smells great– the scent is strong without being pungent and is nicely welcome when you inhale it.

Even the unscented one has a hint of lemongrass that I think is really pleasant; it smells like one of those yoga-mom smoothies, but you don’t actually have to drink it (which is a plus in my mind).

As far as its level of strength and hold, I’d give it high marks – I had a great time putting the lather on.

The cream sticks to the skin very well, it smooths out without much fuss, and the aforementioned mild smell doesn’t overpower you when you put it on.

This stuff is really easy to whip up; it only took a little splash of water to get this stuff moving in all the right places in my shaving mug. I appreciate the little things like giving me an easy time when actually applying the stuff to my face.

As for cons, it’s really difficult to think of any. If anything, I would say it’s a shame it’s not more easily available. It’s just made by this one company and distributed through very limited North American distributors (if you want some other options that are more easily available, we’ve got some for you in the list above).

Furthermore, it’s also quite a little bit pricier than some other shaving creams on the market.

Don’t get me wrong, it’s more than worth it, especially for the quality of shave, but I wouldn’t invest if you are trying to save money. At the very least, ask for a sample first (if you can get one) so you can try it out before plopping down some serious dough for it. That way, you can figure out whether or not Tabula Rasa is a good enough investment to go all National Treasure on a hunt for it.

I would say this particular shaving cream is great for fellas like me who are normally wary of shaving creams.

I’m just normally a shaving soap kind of guy; there’s nothing wrong with shaving creams, I can just never get into them.

However, Tabula Rasa really surprised me; I just love the way it smells, and the ease by which you can lather it on your face.

Sometimes, I do get tired of the same old minutes-long pre-shave lather process I get with soaps, so it’s refreshing to have something that takes much less effort to put on.

Also, I think this shaving cream would be good for people with a sense of exclusivity. Let’s face it: something always feels better to have when you know others don’t have it.

In the case of Tabula Rasa, it’s such a rare treasure to be able to track down (as compared to most other stuff online, at least) that you can’t help but enjoy the fact that you are able to finally grab it. It’s kind of nice to think about the novelty of something being a rarity, so that’s another reason I’d do my best to track down this shaving cream.

Tabula Rasa does an excellent job when it comes to straight razor shaving. This is because the lather is very moisturizing and cushioning on the skin during the shave. If you use Tabula so often, you know the secret already – soft and well-moisturized skin that can easily skip an aftershave.

Besides, Tabula Rasa comes in both scented and unscented forms. The unscented form works perfectly for people with sensitive skin. At the same time, the scented one has, among five other scents, a Dark Lavender with a gorgeous natural lavender oil scent that will make you a non-relenting all-time user.

One of this cream’s best features is its wonderfully pleasant scent; it’s absolutely addicting. I can’t get enough of it, especially since I find a lot of herbal creams to have a bit too much of a strong, medicinal smell for my taste.

Also, it absolutely shaves great – it leaves the skin feeling so moist, and I didn’t have a trace of redness or irritation once I was shaving.

“Tabula Rasa,” after all, means “blank slate,” and that’s exactly what my face felt like when I was finished shaving.

My stubble seemed to just wash away with the rest of the cream, which happened fast and efficiently (I was done shaving in less than a minute). For a few minutes after shaving, my face felt so bright and clean I didn’t even need aftershave or post-shave products.

Still, despite the cost and the difficulty in finding it, I would say it is well worth giving it a shot. I had a blast trying on Tabula Rasa, and I can safely say that, if I ever use shaving cream on a regular basis instead of a shaving soap, this is probably the one I would get. I can’t recommend it enough; just do the homework to track it down and you’ll be set.

These guys also had some good things to say about Tabula Rasa: